Hans Joachim Irmler will appear on german radio RDL on the 25th of February at 10 pm, presenting the forthcoming album "Faust is last" which is due out in april this year. He will also present some rare out-takes from the earlier years. Put a mark in your calender, and check out the radio website for livestream.

Geraldine Swayne & The Art of Murder

A bit late, but if you hurry you can see Geraldine Swayne tonight the 27th Jan 2010 at 6.30pm at the
Institute of Germanic & Romance Studies, Room ST 275(School of Advanced Study, Stewart House, 32 Russell Square, WC1B 5DN London).

This series of seminars acts as a forum for practicing artists, researchers, curators, students, and others interested in visual culture who are invited to present, discuss and explore a given theme within the broad field of Visual Culture.

”I’ve made a lot of work about murders, not because I necessarily want to make pictures of the act but because I am interested in the atmosphere of murder scenes; the way terror distorts reality and the moment when the soul leaves the body.
I became interested in murder as a child and still hold childish supernatural beliefs about murder being a crime against nature, (and hence the universe), changing murderers into monsters and turning blossom to ash.
The resonance of murders, (particularly of young women), passes through me like a kind of medium. When I paint a murderer, what I am asking is: once you’ve killed, have you committed another murder on your own soul; and if you have, can I see it in your eyes?"
Posted by autovern at 11:13 No comments:

Vinyl reissue of Faust IV by Capitol/EMI in their “From the Capitol Vaults” series, has been reviewed by Goldmine magazine. Read it here
Posted by autovern at 23:05 No comments:

Dates for the Avantgardefestival Schiporst has been announced. If you are planning to go there this summer, it will take place from 2nd to 4th of July. The festival has been on the farm and home of Jean-Hervé Peron and Carina Varain for many years, and they open their home to artists and guests to create one of the most important avantgarde happenings in Europe. No artists yet announced, but as a rule Faust, and/or members of Faust will participate as they have done every year.

Posted by autovern at 01:29 No comments:

Current issue of Wonderful Wooden Reasons fanzine features a somewhat untraditional top 10 list of 2010 by Jean-Hervé. The fanzine also names C'est Complique album of the year!
Posted by autovern at 00:54 No comments:

In November Hans Joachim Irmler joined forces with previous EN memeber FM Einheit, and did a gig in Berlin. This concert was videotaped and will be released as a dvd later this year at the same time as an album by "FM Einheit+Irmler" also will be released. There is a trailer of the forthcoming dvd on youtube.
A review of the concert can be found here.

Email ThisBlogThis!Share to TwitterShare to FacebookShare to Pinterest
Labels: Irmler 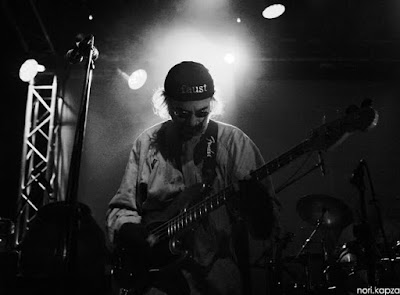 Nori Kapza took some nice pictures from the gig in Athens. More here
Posted by autovern at 00:48 2 comments:

Email ThisBlogThis!Share to TwitterShare to FacebookShare to Pinterest
Labels: Images

Later this month, on Tuesday, January 19th, 3pm - 6pm: Faust, recorded at WFMU Fest in Brooklyn, plus interview w/Jean-Herve Peron. A broadcast of the entire performance recorded live at WFMU's 3 night festival at the Music Hall of Williamsburg where the band headlined October 1st, will be aired by independent radiostation WFMU on Brian Turner's show at 91.1 fm in New York, at 90.1 fm in the Hudson Valley. Live stream can be found at the stations website http://wfmu.org/
Posted by autovern at 23:50 No comments:

Some dates are confrimed for 2010, and hopefully many more to come. As always, go to Faust Myspace to see a full list of upcoming dates. Anyway here are some preliminary dates, details regarding venues etc will follow: